Actions speak louder than words. Let us now see if the DUP really mean that they will support a petroleum licensing ban:

Our very own Dr. Carroll O’Dolan spoke with Diane Little from Lamp Fermanagh, Tom White from Belco Frack Free and Eddie Mitchell from Love Leitrim about some worrying developments in regard to the energy strategy.

Concerned community groups, including FFAN, are stating the extreme urgency for NI politicians to ensure and guarantee a ban on petroleum (oil and gas) licenses in Northern Ireland [NI].

During this momentous time when the COP26 climate change conference was recently held in Glasgow, our own politicians are planning to undermine the very fabric of meaningful change. The NI Department of Economy [DfE, DUP minister] is presently in the final stages of bringing their petroleum policy to the NI Executive and Assembly for a vote before Christmas 2021.

This policy currently does not include the very obvious option of banning petroleum licenses altogether in NI. Instead, it will have various policy options on how to regulate the industry. The agenda for policies to be brought forward has to be jointly agreed by the two parties that make up the OFMDFM (office of first minister & deputy first minister).

Here’s a template for you to send your objection to Department for the Economy in regards to Planning Application PLA2/16:

As residents of Fermanagh, we wish to object in the strongest possible terms to the granting of a petroleum licence to Tamboran to explore for or carry out fracking in Fermanagh or anywhere else in Northern Ireland, for the following reasons:

[Your name]
[Your address]

Send via Email to: [email protected]

The Belfast Telegraph have reported that there is risk that local water supplies that feed the City of Belfast run risk of contamination by Unconventional Shale Gas Extraction (USGE) practices proposed for the area.

The USGE project being carried out by company ‘Infrastrata’ will be taking place 380meters from Woodburn Reservoir, Carrickfergus.

“The Woodburn reservoir outside Carrickfergus supplies Dorisland Water Works, which feeds water to over 1,900 streets, from Ballycarry right down to Belfast city centre.

“Following a freedom of information request we received a map showing exactly where the water from the reservoir goes. It supplies hospitals, health centres, schools, offices, residential areas and all the eateries in central Belfast.

“We feel that the drill potentially could contaminate the water supply and everyone supplied by it should be aware of this.

“A motion has been tabled for debate in the City Hall at 5pm on Tuesday, proposed by the Green Party and seconded by the Ulster Unionist Party.

“We lobbied hard for this debate to go ahead and are hopeful that it will raise even more awareness of the potential hazard the drill could pose.”

Woodburn Reservoir supplied 705 streets across Belfast, 532 streets in Carrickfergus, 576 in Newtownabbey, 59 in Larne, 80 in Whitehead, four in Ballycarry and one street in Antrim.

Ms Joyce added: “The decision to grant InfraStrata rights to drill 380 metres from our water was made without consultation.

“The right to participate and be informed is being violated. The risks of exploratory drilling are detailed and well documented and it appears that the need for intense scrutiny in relation to this sensitive site has been avoided.”

The debate is to take place in Belfast City Hall tomorrow, 1st September 2015.

The Telegrapgh further reported: “However, Infrastrata says it is committed to the project and is in discussions with a number of other parties to secure the £2.8m lost by Larne Oil and Gas pulling out. Infrastrata also said that all the “regulatory approvals and other permits” were in place for work to begin this winter, but the company added that the timing depended on getting a drilling slot for the rig and completing the funding.”

A fracking explosion that occurred in Ohio last year (June 2014) ended up killing 70,000 fish in what appears to be a series of unfortunate events that would make even Lemony Snicket blush.

The event started at 9am, June 28th 2014, with a break in a hydraulic line that sprayed fracking chemicals over nearby hot machinery.This in turn caused an estimated 20 trucks to catch fire, leading to 30 recorded explosions

The fracking well was allowed to leak for a full 15 hours allowing flow back fluid to emit into a tributary of Opossum creak, until the wells closure at midnight.

The fires themselves were burning for seven days, despite the best efforts of local fire services who fought to extinguish the flames.

The Ohio explosion, or explosions as it were, lead to the death of around 70,000 fish and also facilitated the deaths of salamanders, frogs and crayfish through the exposure of flow back fluids that were estimated to travel 5 miles from the epicentre, falling short of the main Ohio River.

Opossum Creek leads into the Ohio River, 1.7 miles upstream from public drinking waters for West Virginian residents. Officials say that no drinking water was contaminated by the tragedy.

Nami Resources Company, a Kentucky based Oil and Gas Company have pleaded guilty to charges that infringed both the Clean Water Act and Endangered species Act after it was found that a 2007 fracking waste water spill led to the deaths of several species of fish in the area.

The fracking waste water originated from four of their fracking well sites into the Acorn Fork Creek in south-eastern Kentucky. Soon after, the majority of the fish in the area died, including those that belonged to two endangered species.

Researchers studied water samples and the bodies of the dead fish, and concluded that the fracking spillage had lead to an acidification of the water, and resulted in the fish genocide, with the deceased fish showing signs of gill lessons, liver and spleen damage.

The research into the incident formed the basis of the 2013 peer reviewed study here.

The Concerned Health Professionals of New York just released a compendium that compiles a significant body of scientific, medical and journalistic findings that highlight the experienced health risks associated with the process of Unconventional Shale Gas Extraction.

One of the most thorough reports of its kind, the compendium draws upon scientific evidence and experience from across the globe, including USA, Canada and Australia, where Unconventional Shale Gas Extraction has been most predominant, drawing upon information provided by medical journals such as The Lancet, the British Medical Journal and the Medical Journal of Australia.

Topics covered by the compendium include:

A compilation of studies and findings from around the globe, the compendium provides irrefutable evidence of the risks, harms, and associated negative trends demonstrated by the process of Unconventional Shale Gas Extraction, a process earmarked for County Fermanagh.

As local knowledge about the potential impacts of fracking grows, fishermen in Co. Fermanagh and beyond are becoming increasingly concerned that fracking poses a serious risk to the future of fishing in the county. 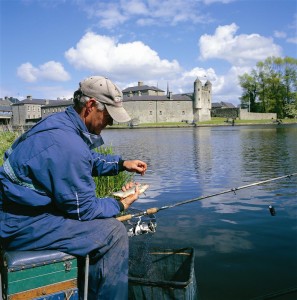 Lough Melvin
Lough Melvin is recognised as a rare and delicate eco-system and has been designated as an ASSI and also a SAC and requires special protection.
– a game fishery with a ‘no stocking’ policy.
– one of the few remaining wild brown trout and salmon fisheries in Europe and home to a healthy migratory run of wild Atlantic Salmon.
– the only Lough in Northern Ireland to have a population of Arctic Char.
– home to three distinct species of trout – Sonaghan, Gilaroo anf Ferox.
– Sonaghan is genetically unique to Lough Melvin and has inhabited these waters for over a million years. Research has shoown that the DNA imprint of the Sonaghan matched no other fish in the brown trout family anywhere in the world.

Lough MacNean
Lough MacNean is classified as a course fishery with excellent stocks of Bream, Perch, Rudd Roach Hybrids and Pike.
– Catches in excess of 20lbs recorded from Lough MacNean.
– It holds a stock of quality brown trout that run its two main rivers to spawn and reproduce ie. the blackwater and Glenfarne rivers.

Potential risks to fishing from fracking
– A network of 20 small loughs and 150 streams rivers extend over a radius of 25km from Lough Melvin and Lough MacNean catchment areas. Six km uphill from Lough Melvin is the centre of the frack zone.
– This network of waterways is the lifeline for fish stocks – eg salmon run these rivers to spawn and reproduce with the young fry residing in the rivers for two to three years.
– Millions fo gallons of water are required to frack a single well; where will where will the water come from to frack 1440 wells and where will it end up?
– Flow-back fluid from fracked wells will contain toxically high levels of salt and other chemicals. If this fluid leaks into surrounding streams and rivers there will be large scale, long term contamination.
– If spawning streams and rivers are contaminated, fish stocks and aquatic life will be killed. The diminished fish stocks and risk to indigenous species may be so severe that our lakes and rivers may never recover.

Fishing and the local economy
– Anglers come to Fermanagh from all over the world to enjoy a unique fishing experience in clean waters and tranquil rural setting.
– There are 4 major competitions held annually:
1) The classic Fishing Festival
2) The World Pairs Fishing Festival
3) The Pike Classic
4) The Lough Melvin Open Trout Angling Championship
Annually, these events attract 1000 anglers from across Europe to Fermanagh.
– Local clubs host a further 8-10 fishing competitions each year which bring significant benefits to rural areas.
– Almost 3000 angling licenses are sold in Co. Fermanagh annually, 85% of the total NI
sales, generating direct revenue in excess of 178,000GBP.
– In 2005, teh angling industry alone was identified as underpinning 778 full-time jobs in Fermanagh.

To download this information as a printable pdf, visit our flyers page.