Admission €12/10. Proceeds from the event go to Love Leitrim.

This was hugely popular at its recent run in the Glens Centre Manorhamilton.

Below you will find a template letter addressed to Minister Arlene Foster, the Minister for Enterprise, Trade and Investment asking her NOT to extend the work programme for Tamboran license PL2/10 any further. We need to do this as quickly as possible so all hands on board please, signing and sharing.

Here is the background:

The work programme for Tamboran license PL2/10 was due to be completed on 1st April 2014 but Tamboran were unable to complete. Minister Foster, without consultation, either with the community or within government, granted Tamboran a six month extension on the license i.e. until 30th September 2014.

In a joint effort [No Fracking Northern Ireland and the Belcoo campaigners], we ran a highly successful campaign gathering circa 1500 objections to the Belcoo exploratory drill. [‘Do the right thing on fracking Minister Durkan’ event and on the ground letter signing in Fermanagh]. We were thrilled and relieved when Minister Durkan decided not to allow the Belcoo drill under Permitted Development Rights.

Unfortunately the story does not end there. We know that time is running out for Tamboran to fulfil the terms of the work programme before the end of September but we are painfully aware that Minister Foster could go ahead and grant another extension. Hence the letter to Minister Foster.

Please send your letter (do change the wording for example if you live nearby add that in, personal statements and stories are much more effective) and then pass this along and get as many people as you can to do likewise. Minister Foster needs to know that if she is considering granting an extension it will be against the wishes of many, many people. This action is far more likely to work when it is multiplied many times. Click the invite friends button above and add your friends too.

We have also included contact info for DETI and GSNI and it is important to make sure all involved are fully aware of this information. Minister Foster’s departmental address has been included for those who would like to send a postal letter. The following letter is shortened version and is ideal for attachment in an email. There is also a version one can print off with space for address, Reference and sign and print name and a further word version which you can edit and modify. See end of this post.

If Tamboran wish to stay in the process in Northern Ireland they will most likely have to get an extension to their work programme and possibly even to Petroleum Licence PL2/10.

Will you as Minister be making this decision or will you abdicate to your department ?

I personally fail to see, how a licence or work programme can be extended given that the Assembly voted for a Moratorium on shale gas exploration, and also there is no policy at the Executive level on the matter. Granting any extension would therefore in my eyes be both against the will of the people of Northern Ireland as expressed by their political representatives in the Assembly, whilst also adopting a unilateral policy on exploring for shale gas in Northern Ireland.

You yourself stated that Tamboran were exploring for shale gas in a Radio Ulster Evening Extra Interview on Monday 4th August 2014.

There are other matters which come to mind also. It is now apparent that Tamboran had ample time to drill this borehole regardless of any decision by Minister Durkan. They first contemplated this publicly in September 2011, and got their work programme changed in May 2012. They have already had one extension to their work programme – I don’t believe they deserve another. Indeed one wonders at the due-diligence which was carried out when granting the extension in March 2014 as this information was all available at the time.

My understanding is that Tamboran’s competency and core values should also be questioned. Given the reports of Pollution by Eastern Star Gas/Santos in the Pilliga region of Australia, and the tie in to Tamboran, and Tamboran board members (Patrick Elliott and Dr David King were both founders of Eastern Star Gas and Tamboran, while Santos are now Tamboran’s partners in Australia) we believe there are serious questions to be asked about Tamboran’s suitability as a licensee. Tamboran also chose a quarry site which they knew to be unlawful as their test drill site; hardly a measure of good judgement.

An Assembly question indicates that the Geological Survey Of Northern Ireland (functionally aligned with your Department) only attended Tamboran’s public meeting out of all the other current licensees. There appears to have been significant hand holding by DETI throughout the history of this licence, yet even still Tamboran seem incapable of meeting the terms of the licence.

Given the information presented, the whole sorry saga of this licence, I believe the decision must be a Ministerial decision and it must be negative in relation to any further extension of the work programme or the Petroleum
Licence.

The emails to send to are:

The reference is of your own making e.g DOB and initials. It can be useful as it forces DETI to record the reference and so any email or letter back takes a bit more work to be personalised.

You can modify to suit yourself.

Some background info about the event on Sunday. A unique celebration and protest through ‘a cappella’ singing. Join with singers from Mullaghdun, Belcoo and all over the northwest, in showing appreciation for our environment and also stand against fracking – through song.

You don’t need to be an expert singer, or even to be able to read music to participate – just a willingness to sing uplifting songs with all your heart. Under the guidance of Valerie Whitworth (Together One Voice), we will practise and then perform the songs in Belcoo.

Where: Meet for a tea/coffee and practice at the Mullaghdun Community Centre (Google Map Location).The Centre is next to Mullaghdun Church about 6 km/3.7 miles on the Enniskillen side of Belcoo – just off the main Sligo / Enniskillen road (A4/N16).

When: Sunday the 17th August at 12.30 pm Public Performance: Afterwards (approx. 3pm) at the bandstand in Belcoo but will be a bit fluid and TBC 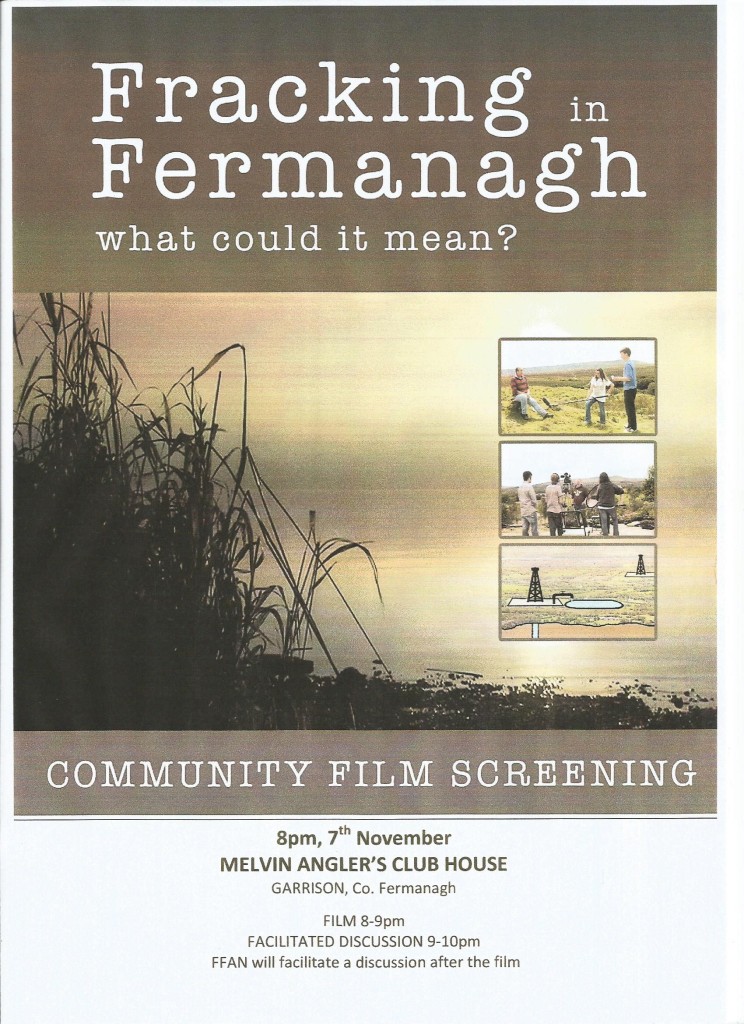