Of strong concern on the environmental safety of unconventional shale gas extraction, is the possible contamination of sub-surface ground waters by extensive USGE operations. A 2011 study in northeastern Pennsylvania by Osborne et al has found that as concentrations of methane gas increased with proximity to gas wells undergoing high volume hydraulic fracturing. Water wells showed elevated levels of methane in wells located near (1 km) from the drilled areas had much lower methane concentrations. Osborne’s findings also show that in some instances, methane concentration was at a state that rendered the water explosive. Furthermore, the methane gas was found to be thermogenic in nature released form shale rock by unconventional shale gas extraction.

The report investigated the Catskill and Lockhaven formations that overlie the marcellus Shale in Pennsylvania State, and the Genesee group that overlies the Utica Shale in the State of New York as depicted below.

The study sampled groundwaters from 68 private water wells that ranged from 36-190 meters deep. Measurements were taken of dissolved salts, water isotopes as well as other dissolved constituents. However, 60 of the 68 wells were tested for dissolved gas concentrations of methane and other organic hydrocarbons. 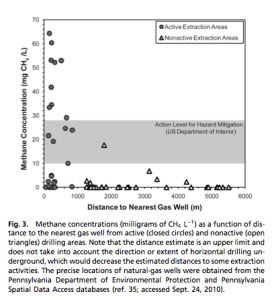 The U.S. Department of the Interior, advises owners of wells with dissolved methane concentrations greater than 28 mg/L to “immediately contact their local county health department to obtain assistance and guidance in venting the wellhead and for other possible remediation alternatives.”, due to the explosivity of the water. As can be seen above, samples from nine active gas extraction areas meet that criteria.

Furthermore, owners of wells with methane concentrations greater than 10 mg/L but less than 28 mg/L are recommended to “contact their local county health department for further assistance and might consider removing ignition sources from the immediate area.”

However methane concentrations less than 10 mg/L require no action, other than periodic monitoring to assess changes in concentration over time.

Methane gas can exist naturally as ‘biogenic‘ gas, and it has been argued that relatively high methane in this part of the Appalachian Basin is due to natural flux of methane and is not linked to the shale gas drilling. However whilst biogenic gas can exist in waters naturally, the methane gas associated with unconventional shale gas extraction is ‘thermogenic‘ in nature. Understanding the origin of the methane is of importance as it helps determine the source of contamination.

As a result, Osborne et al had to determine wether or not the methane concentrations found in the private drinking water wells were as a natural result of biogenic sythnesis, or anthropogenic release due to unconventional shale gas extraction. 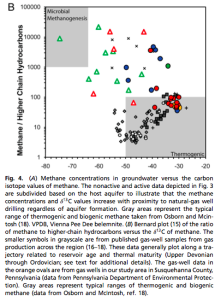 The task to separate methane sources and thus the distinction between natural flux and anthropogenic contamination is based on the different isotopic and geochemical compositions of thermogenic relative to biogenic methane sources. It was shown that the elevated methane in drinking water wells near the shale gas wells had a thermogenic composition (e.g., heavier) than wells located 1 km away from shale gas sites with an apparent mixed thermogenic-biogenic composition.

In regards to ethane and other higher-chain hydrocarbons contamination of those analytes were found in only 3 of 34 drinking-water wells from nonactive drilling sites. In stark contrast however, ethane was detected in 21 of 26 drinking-water wells in active drilling sites. Further to this, trace contamination of other gas extraction related analytes, such as propane and butane were also detected from active drilling areas, but not in wells from nonactive areas.

The investigation did not find any evidence of brine or fracking fluid contamination. Furthermore, they found no evidence for contamination of the shallow wells near active drilling sites from deep brines and/or fracturing fluids and salt concentrations in wells from active drilling areas were consistent with the baseline historical data and levels of radon were indistinguishable between active and inactive gas extraction areas.

In short, the geochemical and isotopic fingerprint for water measured in the shallow wells from both active and nonactive areas are consistent with historical data and inconsistent with contamination from mixing Marcellus Shale formation water or saline fracturing fluids as shown below.

In conclusion, the main findings of the peer reviewed report found that methane concentrations not only increased in proximity to active gas wells, but results reflect that contamination of methane gas in the water was thermogenic in nature, and therefore released by unconventional shale gas extraction.

You may read the peer reviewed paper here.