The Impartial Reporter have stated on the 31st July: 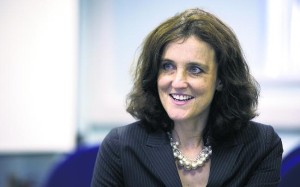 Theresa Villiers also said the decision on whether or not to press ahead with fracking in the county will be for Stormont and Fermanagh and Omagh District Council to make, and not Prime Minister David Cameron.
Speaking to The Impartial Reporter on Monday, during a visit to Enniskillen, Ms. Villiers described fracking as “an important new technology that has delivered some significant benefits where it has been used in the United States”.

She made her comments on the day that the UK Government invited bids from energy companies for licences that would allow them to start fracking wherever resources can be found.
Ms. Villiers told this newspaper: “We think it has potential for use in the UK for helping us with energy security in keeping energy bills as low as possible. We do appreciate that if it is going to happen anywhere that careful consideration needs to be taken of its local environment impact.